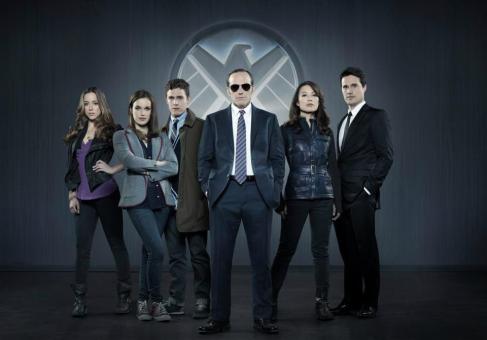 So it finally happened, last night was the night we’ve all, or at least I have, been waiting for since the announcing of its existence. Last night we got to watch the pilot of Marvel’s Agents of S.H.I.E.L.D. on ABC.

Naturally, since this was a Marvel endeavor, headed up by Joss Whedon, the man responsible for the über successful Avengers movie, not to mention Buffy the Vampire Slayer and Firefly among other things, there was a ton of hype surrounding the show. Buses all over Manhattan bore the faces of the cast, they even had an ad running on Pandora which was in heavy rotation yesterday. Whoever did the PR on this project, I salute you. That being said, aside from the fact that Agent Phil Coulson was in fact alive, and had assembled a team of “special ops” , despite all my digging, I didn’t really know much about what was going to happen going into the premiere. Sure, I knew that it was set in the Marvel-verse post The Battle of New York, and that the Avengers would NOT be on the show, but as to what the team would actually be dealing with?

And so, last night I raced home, flopped on the couch and embarked on the journey into the inner workings of S.H.I.E.L.D. and here’s what I came away with.

I start this discussion by pointing out, this was a pilot, and let’s face it 98% of pilots are awful when compared to the actual series. So while it was by no means perfect, we need to handicap it as it was the first episode.

It was clear from even the first few moment, that this show has been given a BIG budget, which personally made me giddy. We’ve seen the kind of awesomeness Joss can do with a teeny tiny budget, so I can only imagine the possibilities here.

As always the cast was peppered with familiar faces to The Whedonverse, Ron Glass (Shepard Book, Firefly) has a brief appearance as Doctor Streiten toward the beginning of the episode, and the guest lead was J. August Richards (Gunn, Angel). Colbie Smother reprised her role of Agent Maria Hill for a special guest spot. Basically to bridge the gap between where we left off in The Avengers and where we pick up with the reintroduction of Coulson.

Speaking of the reintroduction of Coulson, can we all take a mo-mo to appreciate how perfect his introduction was? He actually made fun of the exact cliche that was occurring, and in that brief moment reminded us all of the adorable, mild mannered Agent Coulson we fell in love with in Iron Man.

Although Coulson is back, something is off. When explaining his return, he states that he “…was looking at the big white light and it felt a whole lot longer than eight seconds…” then later Doctor Streiten and Agent Hill speak in hushed tones about it being key that Coulson never know something. My theory, is that he really did die and S.H.I.E.L.D. brought him back. Resurrection glove anyone? Sorry. I may have been watching too much Torchwood. Honestly though, the concept of resurrection is neither new to Marvel or Joss Whedon, so it is a perfectly reasonable theory that he was brought back. Late in the episode Coulson laments that he’s “…seen giants up close and that privileged cost me nearly everything…” So could Coulson be The Avengers’ Buffy? We’ll have to wait and see.

We are also introduced to a whole team of characters including Melinda May (Ming-Na Wen) a former field agent who in no way wants to go back into the field, Grant Ward (Brett Dalton) the ruggedly handsome Black Ops agent who’s espionage skills Agent Hill marked as “the highest she’s seen since [Natasha] Romanov”, who has the people skills of a “little pile of poop with knives sticking out of it” or a porcupine. They also allude to him having a troubling family history.  Add in a hacker turned ally named “Skye” (Chloe Bennet) who apparently deleted identity, so you know there’s going to be a checkered past story there.

Finally we get to Fitz/Simmons, who by far are my new favorite characters in the verse. Iain De Caestecker (Leo Fitz) and Elizabeth Henstridge (Jenna Simmons) are absolutely adorable. They remind me a lot early Willow and Xander. You know before Willow got all witchy.

The tech used by the team is amazing, and surprisingly doesn’t feel too far off from what could actually be developed in a few years or so. The idea of embedding a com link into someone’s DNA, both terrifies and excites me.

But of course the real star of the show is the writing. The pilot was written by Joss Whedon, Jed Whedon and Maurissa Tancharon, who previously worked together on Dr. Horrible’s Sing-a-long Blog. Joss Whedon has always been praised for his witty, quick paced dialogue and Agents of S.H.I.E.L.D is no exception. The episode was chock full of wit and pop culture references.

Personally, I really enjoyed the show and am really looking  forward to seeing where they go next. What about you? Did you love the pilot? Hate it? Will you continue to watch? Tell us your thoughts in the comments below.