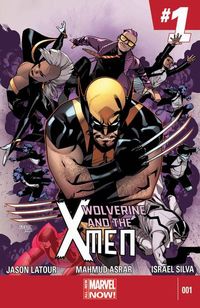 This week Issue #1 of Wolverine and The X-Men was released. Always on the look out for new reads, I picked a copy up at my (kinda local) comic book shop. Check out below the cut for thoughts/opinions. Slight spoilage…

Ok, so I admit I’m not entirely up to date on my X-Men storylines. I am not completely out of the loop though, I was well aware that Cyclops killed Professor Xavier in an issue of the recent Avengers vs. X-men series, despite not having actively read it. However, much of my X-Men love comes from the adoration of the 1990’s animated series that aired on Fox. If you have never seen it, episodes are available on DVD.

So I was excited to see a new (well sorta new, since this is a relaunch of a title that previously ran for 42 Issues) X-Men book being released, even more so when I checked out Things From Another World‘s description:

World-famous X-Men Wolverine, Storm, and a star-studded faculty must educate the next generation all-powerful, but inexperienced mutants! But with their own lives steeped in deadly enemies and personal crises, how can the X-Men guide and educate–let alone defend–the school?

At the Jean Grey School, you never know who will enroll…or who will lead the class! And what mysterious organization waits in the shadows to destroy Wolverine’s mutant sanctuary?

These questions and more are answered in the All-New Marvel Now sure-to-be-smash, WOLVERINE AND THE X-MEN #1!”

I mean, what’s not to love about that? The actual book however was a different story. A lot is going on, unfortunately, without being versed in all that happened in Wolverine and The X-men, (before the relaunch) I did feel a little overwhelmed/lost. Right now, Storm is the only “senior” member at the school, as Wolverine, who has also taken off for some reason or other, has granted the rest of the “Star-studded Faculty” extended personal leave. We are left with student teachers to run classes and such. Basically everything is a big old mess.

It wasn’t a bad issue by any means, in fact, I’ve seen plenty of people raving about it. However, if you’re new(ish) to the world of X-Men, or at least the current comic book world of X-Men, you may want to do some research/check out the original title before diving in. Personally, I’m not sure if I’ll be grabbing Issue 2.

Got any thoughts/opinions on Wolverine and the X-Men #1 to share? Hit up the comments and let us know what you think.

3 thoughts on “Wolverine and The X-Men Issue #1”