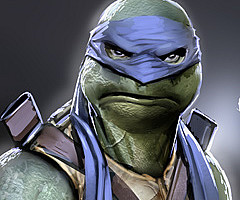 Ok, ok so I know that Michael Bay is only the executive producer and not the director of this film, but I am going by The Black Nerd’s reference and calling them Bay Turtles, since Michael Bay has a big featured card in the trailer…just go with it folks.

Anyway, this new trailer is a little bit longer and we get to actually see ALL the turtles in their….um…terrifying glory…

Ok, so let’s break this down a bit. First off Megan Fox is playing April O’Neil, who is a tv reporter, and despite the fact that there have been now TWO trailers, we have not heard utter a SINGLE WORD. Now, something about that just seems off to me. Right? Am I alone on this?

Then we have the reveal of the ALL the Turtles…sure we saw Mikey before but now we get to see them all and guys…they have teeth. I have stated before, I think they are kind of terrifying to look at, with their more human lips and noses, but teeth? Turtles don’t have teeth! No, I am not talking about the 1990’s turtles not having teeth, I am talking about the animal the turtle not having teeth.

I find the fact that the Bay Turtles have teeth really creepy. Though it might make sense if they were mutated from humans as opposed to having been mutated from turtles as the 90’s era cartoon and movies had us believe.

Again, I will state that I am trying my hardest to not form concrete opinions on the film until I see it, but I’ll admit I’m a little nervous…

Thought? What do you guys think of the new trailer? Hit up the comments and let us know.