On March 10th, 1997  a little show aired on the WB that would ultimately change Pop Culture as we know it. Yes folks, I’m talking Buffy the Vampire Slayer.

After a tiny bit of insomnia, and a deep tidal wave of nostalgia, I’ve decided to start a rewatch of everyone’s favorite blonde badass to see how it stands the test of time, okay, maybe I just wanted an excuse to rewatch and share thoughts.

Plot: A witch attempts to eliminate Buffy from a cheerleading competition.

– Buffy explaining to Giles why she wants to be a Cheerleader. In fact let’s face it, the whole Buffy wanting to be a cheerleader again is wonderful.
– While Willow and Xander are talking about Buffy not “seeing” Xander, he makes reference to Willow not needing “to drive it through my head like a railroad spike.” And now while I rewatch I can’t help but wonder if that is a Spike reference. Because Yeay Spike!!!

-This is the first episode where are big bad isn’t a Vampire. Which you know sets the tone that there’s more to the show then just stake the vamp and go.
– Giles and Buffy’s relationship. When  Buffy is stricken ill by the spell, Giles takes it upon himself to preform the counter spell and save her.This is the first episode that we really get to see how much he actually does care for her, even this early on. 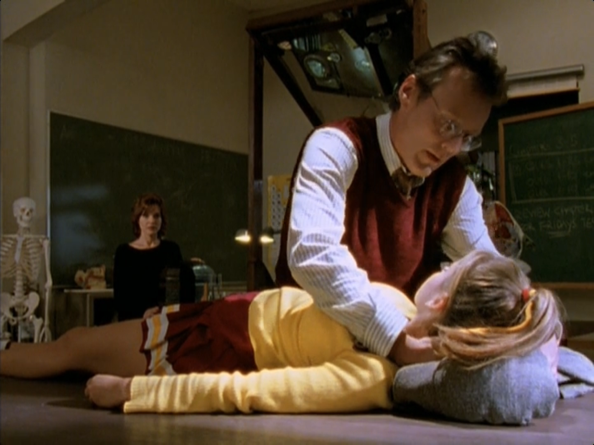 Fave Quote:
Xander: “I laugh in the face of danger. Then I hide until it goes away.”

Buffy telling Xander he’s “One of the Girls”

Does it Hold Up:

I have to admit, it wasn’t one of my favorite episodes, but still not every episode is going to be a winner. It’s nice to see a non vampire centric episode. Plus it’s nice to see them expanding the Sunnydale universe. Also the ending is kind of terrifying.

What are your thoughts on this Classic Buffy episode?  Hit Up the comments and let us know.  Up Next: “Teacher’s Pet”