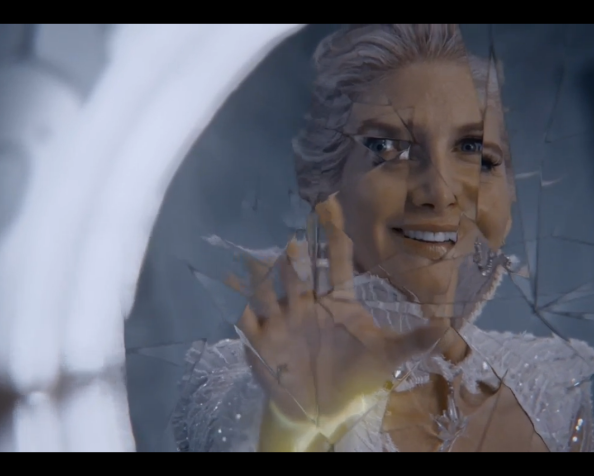 Sorry for the delay guys, but better late than never right? On the plus side, this recap comes just in time for our Once-less Sunday night. So sit back, relax and relive last weeks’ epic 2-hour episode!

In Arendelle our flashback begins with Ingrid (Storybrooke’s Snow Queen) burying the sorcerer’s box and then tracking down his apprentice in the Enchanted Forest. She makes a deal to return the sorcerer’s hat in exchange for happiness in the form of two new, magical sisters.

Ingrid then returns to Arendelle and stops Elsa’s happy preparations for Anna’s return with news that Anna found the sorcerer’s hat and was planning on using it to “cure” her sister, a crime for which she is now locked in the dungeon. Ingrid tries to turn Elsa against Anna, and we are led to believe it has worked until Elsa releases Anna from the dungeon and admits it was an act she put on for Ingrid and the guards. They scour the castle, with Kristoff’s help, for the urn with the hopes of trapping Ingrid again. Once they locate the urn, (hidden in a wardrobe with a frozen Hans!), they plan to double-cross Ingrid. Anna returns to the dungeon with the urn, only to be magically handcuffed by her aunt. Ingrid tells Anna her favorite story as a child was a Norse legend called “The Trolden Glass,” which she makes Anna recite to her – it’s the story of a Norse king who had a mirror made for the birthday of his beautiful daughter, only to have her die the day before she was to receive it, causing the mirror to reflect back only his own pain and sorrow instead of her beauty. Devastated, the king cast a spell using the mirror, making the people in his kingdom see only the worst in their loved ones and turning them against each other. Anna realizes Ingrid intends to cast this same spell, the spell of Shattered Sight. She’s not powerful enough to cast it over the entire kingdom, but she does cast it, on Anna.

When Anna returns to Elsa she shocks Elsa with her hateful comments about how horrible Elsa was to her in their childhood. Elsa realizes Anna is under a spell and Ingrid tries to convince her the only way to stop Anna is with magic. Elsa refuses to use her magic against Anna, giving Anna a chance to open the urn and trap Elsa inside. Ingrid, not planning on this development, is angered and threatens Anna. Kristoff tries to stop her but succeeds only in getting himself, along with Anna, frozen as Ingrid takes off with the urn.

Rumplestiltskin appears to reclaim the sorcerers hat as Ingrid is removing memories from Elsa, still trapped in the urn. Rumplestiltskin steals the urn, promising to return it to her once she finds and returns the sorcerer’s hat.
After retrieving the box, she starts to call Rumplestiltskin’s name, but is stopped by the sorcerer’s apprentice, who’s come to remind her of their original plan. The sorcerer has found a third sister, who has not been born yet, and she must be patient in order to get her happy ending. Ingrid returns the box to the apprentice and is sent through a door to NYC, circa 1982, with a scroll holding her prophecy.

Now on to the Storybrooke side of the episode. Remember that passionate kiss Regina and Robin shared at the end of the previous episode? We are treated to a lovely little “morning after” scene in the vault with the two of them this week and it was well worth the wait. Regina laments not having listened to Tinkerbell decades ago and choosing Robin when she had the chance. Robin tries to get her to enjoy what they have now but she insists things aren’t meant to end happily for her, and shows him Henry’s book and the Evil Queen’s stories as proof.

Henry tracks down Emma in the woods. Still unable to control her powers, she accidentally hurts him and then insists he leave her alone. He runs back to his grandparents, who have recently given up their own search for Emma. Elsa tries to comfort them all, explaining from her own experience what Emma is going through. Meanwhile the Snow Queen appears and tells Emma that the control issues with her magic will end when she embraces who she is. Emma refuses to accept this and tracks down Gold to enlist his help in harnessing her magic. He tells her of a spell that will permanently remove her magic, making her “ordinary,” and they agree to meet at an abandoned manor in the woods to enact it.

Regina, a little late to the action as a result of her little romp in the vault with Robin, arrives with a potion to help them locate Emma. She comforts Henry and heals his wound. Henry comments on how it must be nice to have magic and thinks he would’ve been able to help Emma if he hadn’t been “ordinary.” Regina quickly shuts down that thought, telling him he has the heart of the truest believer, which makes him special.

The Charmings receive a call from Emma saying she’s found a way to give up her magic. Mary Margaret and David debate whether this is a good thing, initially believing it is. When Elsa overhears them discussing how it may be the only way for Emma “to be normal,” she steals the tracking potion and sets out to find Emma on her own. When Regina discovers Emma’s plan, she talks Mary Margaret and David into stopping her, pointing out to them that she almost ruined her relationship with Henry when she didn’t support the part of him that made him special.

When Hook realizes what Emma is up to he frantically tries to stop her, realizing that Gold will likely betray her. He leaves her a message admitting to being blackmailed by Gold and warning her what Gold’s true plan is, to trap her magic in the sorcerer’s hat.

Meanwhile, we discover that Robin has stolen Henry’s book from the vault and enlists Will Scarlet to help in his quest to find the author. They search the library beneath the clock tower, and though they have no luck finding any similar book, Robin discovers a new storybook page in his satchel.

While searching for Emma, Regina and Mary Margaret discuss Regina’s complicated relationship with Robin Hood. Regina tells her it won’t work because something is working against her happiness. Mary Margaret, ever the optimist, tells Regina she should have hope. Regina is called away from the search by Robin and she joins him in the library where he shows her the new page he found. It appears to depict an alternate version of Robin and Regina’s first encounter which ended with them kissing in the pub instead of with Regina running away. Robin tells her it’s a sign of the possibilities in Regina’s life and of hope for their future.

Gold visits the Snow Queen’s lair, trapping her in a magical cage with the remains of her former prison, the urn, all while taunting her about his plans to take Emma’s magic away, thus ruining her own plans to create a new family. The Snow Queen realizes that, despite being trapped, she can still use her magic and she projects a vision of herself to Emma to warn her about Rumplestiltskin’s impending betrayal.

Back at the manor Emma and Gold have agreed to meet in, Gold opens the sorcerer’s box and sets out the hat for Emma’s arrival. When Emma comes he tells her he’s already cast the spell, she just has to open the door and walk into the room. When she expresses doubts about their plan after her encounter with the Snow Queen, Gold plays on her inborn duty as the Savior and implies that, in doing this, she’s ultimately doing the right thing. Elsa runs in just in time to stop Emma from opening the door. She convinces Emma that giving up her magic isn’t the answer to her problems. She shares what she’s learned since arriving in Storybrooke, that the acceptance of their friends and family is important, but the only way to be in control of the magic is to embrace it and who you are.

Hook shows up at the mansion to stop Emma, but is trapped by Gold before he can get inside. When Gold realizes Emma hasn’t gone through with the plan to give up her magic, he’s disappointed, but we soon learn the evening’s not a complete failure for him. The secret item the Snow Queen clued him in on that will finally separate him from the Dark One’s dagger turns out to be the heart of someone who knew him before he was the Dark One. Hook is the only person who fits that bill. Gold removes his heart, effectively making Hook his puppet. He charges Hook with finding a way to fill the sorcerer’s hat with magic.

While Emma goes out to reunite with her family, Hook makes sure to retrieve the sorcerers box before joining her. Emma is embraced by Henry, David and Mary Margaret and puts on a little light and fireworks show for them to demonstrate her newfound control over her magic. While she’s doing this Henry notices a yellow ribbon on her wrist, and Elsa discovers a similar one on her own wrist. The Snow Queen, having been freed from Gold’s trap, placed them there. They’re unable to remove them and both feel the ribbon harnessing their magic. Back in her lair, the Snow Queen, sporting her own yellow ribbon, tells Gold that the ribbons bond three magical sisters, and are only now able to work because all three have embraced their powers. The Snow Queen can now wield Emma and Elsa’s powers and tells Gold she plans to cast the Shattered Sight spell over Storybrooke. We end with her magic mirror shattering in a cloud of magic.

Sadly we have a week before we get to find out the aftermath of the Snow Queen’s Shattered Sight spell. Will the residents of Storybrooke be able to stop it before they destroy each other? Who will stop the Snow Queen? Tune in for next week’s recap to find out!