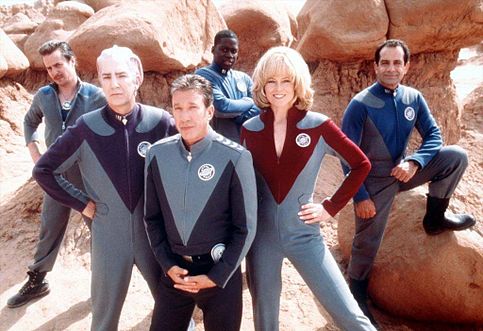 Hold on to your butts, geeks! The cult classic film Galaxy Quest is headed to a TV near you! Paramount television is in the process of putting together a television series based on the 1999 DreamWorks film. Say what?!

If you have never seen Galaxy Quest a) you can’t sit with us and b) you have no idea what you’re missing. Penned by Robert Gordon, directed by Dean Parisot and starring Tim Allen, Signourey Weaver, Alan Rickman, Tony Shalhoub, Sam Rockwell and Daryl Mitchell, what is not to love? Yes, it is a spoof on Star Trek, but it’s a good spoof. It reached cult status almost overnight and happens to be something that I adore. Should it be a series? I’m not so sure. What was a fun and well done spoof film of a beloved TV series having it’s own series spoofing another series? Uhm …. maybe not?

What say you geeks?