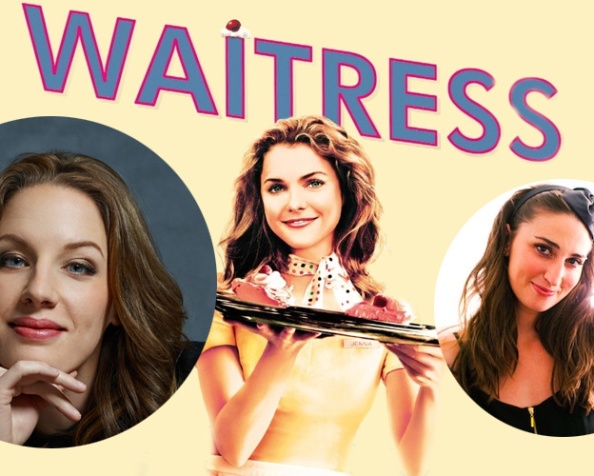 I don’t know about you, but the one and only time I watched the film Waitress, my first thought was most definitely not ‘hey, this would make a great musical!’ The film starring Keri Russell and Nathan Fillion is the story of, quite literally, a waitress. She makes the best pie in town and is always coming up with new pie concoctions. Oh, she is also in a horrible marriage and gets pregnant thus introducing her to her gynecologist, aka Nathan Fillion. Spoiler alert: they have an affair. Great musical subject matter, right?

Before I get too negative and before you turn way, let me just take a moment to mention two names involved in this production: Sara Bareillis and Jessie Mueller. Do I have your attention now? Sara Bareillis is much more widely known for her get-stuck-in-your-head song lyrics and beautiful piano melodies, but she grew up walking the boards of community theatrer.

“I kind of just said, ‘Let’s try,'” Bareilles said. “Stepping back into theatre, a childhood dream, I always felt like I would be onstage. I hadn’t imagined myself in a composer role…

Jessie Mueller should strike a nerve if you are a broadway nerd, like us. She was most recently in Beautiful: The Carol King Musical which garnered her the win of a Drama Desk Award for Outstanding Actress in a Musical and a Tony Award win for Best Actress in a Musical. Pretty sure she will do Jenna justice with Sara Bareilles’s lyrics and melodies.

Waitress is slated to open for it’s out of town run on August 2nd at America Repertory Theatre in Cambridge, MA. Only time will tell if we will be seeing Waitress on Broadway. My gut says we will.

One thought on “Waitress: The Musical – Sara Bareilles shows us what she can do”