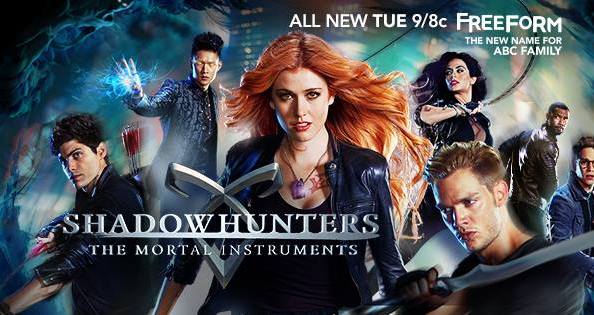 We are six episodes in!  Click below to get EM’s recap to Episode Six “Of Men & Angels”

We  open with Clary and Simon rushing into Magnus’ fab new apartment with a very injured/hallucinating Luke. Lookie we are getting some more Luke! It’s about time, by the way, it bothers me that tv shows often forget that teenagers have parents/guardians. Does that mean I am getting old?

Cue a weird Jocelyn in a garden hallucination, where she informs Luke that “Clary is the key” and that he must tell her everything and help “unlock her” to “stop Valentine”. It’s all very cryptic, and then she fades away. As you do. Back in reality, Luke desperately tries to tell Clary, something, but is prevented by what appears to be some sort of transformation.

THEME SONG! Anyone else not really digging the opening credits?

Luckily Magnus can stop the transformation, duh. He is super powerful and all, I mean Cat eyes, need we say more?

Meanwhile back at the institute, Maryse Lightwood, Aka Bitch Mama, is informed by Izzy that the Seelie are thinking of switching sides since Valentine killed their spies. Maryse of course takes this opportunity to be a bitch to her daughter.

Back at Magnus’ Clary frets over Luke and Simon tries to comfort her in his ever adorable lost puppy dog way.

Jace returns, with minimal blood on his face, Freeform actors must remain pretty at all times you know, apparently having crashed Luke’s car while trying to ditch it. Mundane Driving ain’t his thing, apparently.

Magnus informs the trio that he will need some more supplies to treat “the alpha wolf poison” that is apparently coursing through Luke’s Veins. Jace and Simon do the whole alpha thing vying for who’s gonna go get the ingredients, and oh and he needs Alec too, for his “Virgin Shadowhunter Energy”

Back at the Institute, Izzy tells Alec he needs to stop being so stubborn and call Jace to make amends. Clearly he can’t though, because teenage angst, dammit! Then who should appear but Robert and Max Lightwood! We apparently have gone form no supervision whatsoever to ALL the parental figures we could find in one episode.

Daddy Lightwood is NOT happy at the fact that Clary is not there at the Institute and yells at his children to get her back. Ever the Obediant one, Alec calls Jace and tells him to come back now. Jace refuses, as he is wont to do, and tells Alec that Magnus needs him treat Luke, though he leaves out the “virgin” part of it.

“I shouldn’t have to ask you Alec, we’re Parabatai.” Jace growls in an attempt to get Alec to come running.

But Alec is not having any of his shit and refuses to go.

Meanwhile, Magnus is mixing up “the base for the potion” and Clary, who is clearly concerned, is uselessly asking questions, and questioning her position in the “Shadow World”.  Magnus, does some sort of weird hand wavy thing to get rid of Luke’s pain.

Simon and Jace, bicker and fight the whole way to pick up the ingredients, and Jace calls Simon out on his feelings for Clary, they bicker some more and Simon pulls a knife on Jace, because, vampires and stuff. Yet when confronted Simon refuses to tell Jace what actually happened at the Vamp Hotel, because where would the drama in that be?

At the Institute, Alec approaches his mother to try and find out what has her on edge. Cue some mother/son bonding time, reminiscing about when she told him to think outside the box to broke some kid’s nose in kendo training. Little does he know what his mother has in store for him.

Magnus gives Clary a sketch books so she can draw, because that will solve all her problems.  Apparently sketching whatever Magnus tells her will help, unlock her memories within.

A-yup, she really did say that…Dear writers, you were doing so well, what happened? -Me

Anyways now we enter what I like to call the “Exposition Hole”. I am well aware of the importance of backstory, especially in the case of The Mortal Instruments series, how ever all the blue tinted “flashbacks” to  BabyVal, BabyLuke and BabyJoce just seemed to drag. I will say this though, BabyVal is kinda a babe.

As Clary sketches what she is told, Izzy over hears her parents fighting and learns of their plans to restore the family honor, which apparently has been destroyed over the unsanctioned missions for Clary that occurred while Mommy & Daddy Lightwood where away. But no worries, there is a tremendous sacrifice that can fix it! Izzy must speak to The Clave to placate the Seelies and Alec…well he’s gonna have to marry for a political alliance. No biggie.

Oh Look, more blue tinted flashbacks! I understand, this was a stylized choice…just not too sure I’m digging it. Hey, at least the flashbacks give us some great fight scenes. As BabyVal attempts to secure the Mortal Cup, BabyLuke charges in to stop him. Just as it looks like BabyVal has the upper hand, sword raised ready to END BabyLuke, BabyJoce, conveniently,  appears on the roof overlooking the battle, and hucks a dagger into BabyVal’s back. This distracts him long enough for her to execute a perfect “Superhero jump” down to the ground. I will say this for BabyJoce, she’s kinda a BAMF. After a brief sword fight, she gets the upper hand, steals the cup and runs off, BabyVal in hot persuit.

Luke starts waking up, the poison apparently taking more of a hold, while Izzy informs Alec of their parents’ plans to marry him off. Understandably Alec is less than thrilled with this development, and decides to screw it all.

Time for more of the Simon & Jace bickering, because, in case you’ve forgotten they don’t get a long. Jace disappears into some rando warehouse, to secure the ingredients, leaving poor little Simon alone with his hallucinations, one of which includes seeing his own dead body drained of blood.

Cue Jace coming running out of the building, being chased by something, he now has to kill. As Magnus is trying his best to keep Luke stable, but he’s running out of magic. Which seems odd since you know he is The High Warlock of Brooklyn, which would imply that he is pretty damn powerful. Just when it looks like our fave warlock, might pass out, who comes in and saves the day? ALEC!

“Help me, I need your strength…” -Magnus

“Take what you need.” -Alec

And then there is some serious hand holding/teamwork/strength sharing happening and all the Malec fans giggle with glee. Shockingly, at this moment, the bickering boys burst in with the ingredients, and Clary uses them to complete the potion, which she then feeds to Luke, crisis averted…maybe?

First let’s see what Izzy and Bitch Mama are up to. Basically once again, Mama calls Izzy a useless slut. Okay, maybe she didn’t use those words but that is what is being implied here.

Izzy teaches Max off of Shadowhunter flashcards and Bitch Mama, comes in to try and apologize.

“Passion Makes you Dangerous, that’s why you are not read for the responsibility you think you are.”-Bitch Mama

And now once again we fall into the Exposition hole, as Clary confronts Luke to tell her about the past. I must admit, I’m not overly upset over all the shirtless Isaiah Mustafa, that’s happening at the mo-mo, although did we really have to cover him so much with bandages. Le sigh, hope you’re ready for more blue tinted flashbacks. BabyLuke & BabyJoce apparently fell in love, but never had an affair, because that would be wrong. But BabyVal believed that they were and experimented with “Downworlder Blood”, also lured Luke into being attacked by werewolves, guess we know how he turned now. Back to the BabyLuke/BabyVal/BabyJoce fight we watched earlier. Luke stresses how bad Valentine getting the cup would be.

Back to Izzy, who is prepping herself to become more responsible, which apparently means cutting ties with the Seelies, pulling her hair back, and wearing longer dresses.

On to more exciting moments, Alec is currently scrubbing the blood from Magnus’ couch, when Magnus reminds him he has magic for that and offers Alec a drink instead. Mhmmm, we all know where this is headed.

Alec asks why Magnus asked for him to come, and in true sassy warlock fashion, Magnus tells Alec he’s “Unlocked” something in him…Cue Bitch Mama calling Alec’s cell and interrupting a perfectly good Malac mo-mo. Of course, our fave Shadowhunter is all set to flee to his mother’s side, when Sassy warlock asks him to stay “For one more drink and then decide.”

Clary confronts Luke about the box that belonged to her father, only to learn that the box belonged to her brother who died in a fire that Valentine set. In her shock Clary leans her hand upon the box and boom, it is suddenly no longer a box but a perfectly sketched rendering of the box on Clary’s sketch book. WTF? But wait, Clary’s done this before, with her biscotti in episode one! Suddenly, Clary realizes where her mother hid the cup! And….

Okay, I have to say I definitely didn’t enjoy episode six as much as episode five. Of Men and Angels, just felt a little flat. While I understand that backstories can be important to the plot, in this material especially, it just felt like a lot of telling rather than showing. Even though I PROMISED myself I wouldn’t compare book to show, and for the most part I don’t, I can’t help but feel as though tv Clary is a bit more whiny/needy than book Clary. While I 100% believe in Simon’s pining Clary and in the delicious tension between Magnus and Alec, I’m not fully sold on the whole Jace and Clary attraction/relationship.

I will say however that I  LOVE how the Clary/Izzy relationship has been handled throughout the series so far. Not once have we seen any sort of jealousy/competition between the two, which is so rare in media today. So good on you PTB!

What do you guys think? How are you feeling about the show so far? Hit up the comments and let us know.
~EM
Shadowhunters airs Tuesday nights at 9pm on Freeform, and is also available on Hulu, and the Freeform ap.

One thought on “Recap: Shadowhunters Episode 6 “Of Men & Angels””