Recently we were asked to take a look at the second installment of the Geek-Girl mini series published by Markosia. A comic about an awesome college student who gets magical powers and becomes a superhero, is totally up our alley and so we were super excited to take a look. Click below to check out a preview and find out more.

Created and written by Sam Johnson (The Almighties, Cabra Cini: Voodoo Junkie Hitwoman) and illustrated by Carlos Granda (Grimm Fairy Tales, Charmed), the 4-issue Geek-Girl Mini-Series which tells the tale of Ruby Kaye’s world being turned upside down in result to acquiring super-tech specs. These awesome glasses grant her the powers of  flight and super-strength, pretty cool huh? Unfortunately, there is a flaw in their programming that  has also rendered Ruby super-klutzy. Ooops! Now that we know her origin, what’s in store for Geek-Girl in Issue #2?

Well according to the press release:

Having duped the college brainiac into giving her his powers-inducing glasses, and found herself in a position where, in the absence of Maine’s resident super-heroine, she’s promised to stop badass new super-villain Lightning Storm – Ruby Kaye has now inadvertently hospitalized her city’s other resident super-hero (and only potential aide) while trying and failing to stop the villain. So what’s she gonna do? What any self-respecting girl would do in her position. Get drunk! 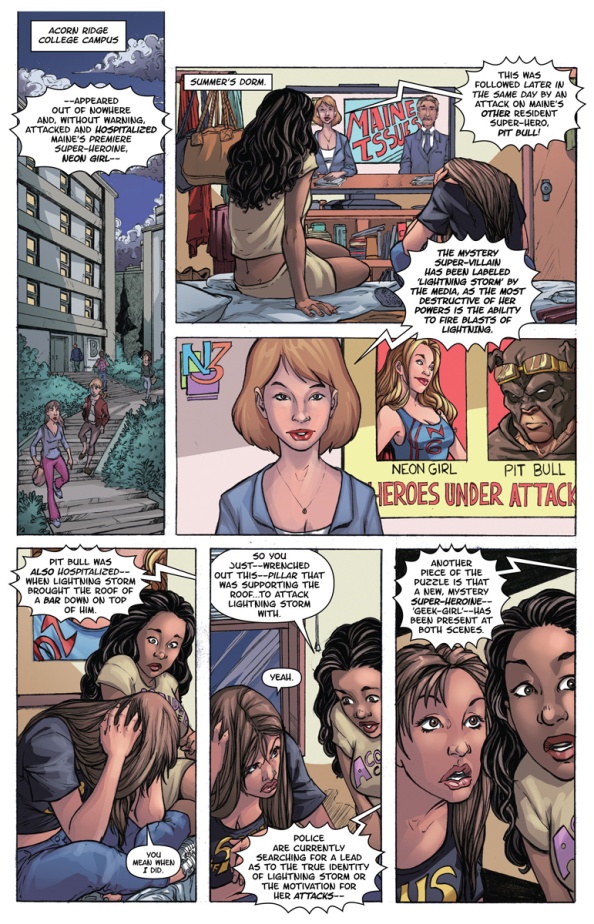 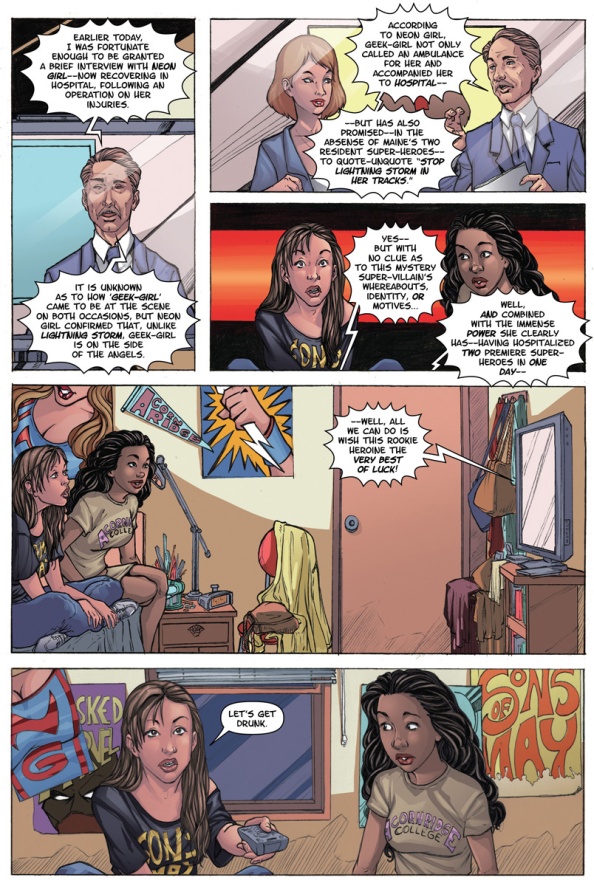 Here’s where Geek-Girl goes right, in this second installment, Ruby is still trying to figure out what her new identity means to her. Clearly she isn’t Little Miss Popular anymore, having alienated herself from her former gals pals, save Summer, and despite the fact that they give her kick ass superpowers, she doesn’t feel sexy wearing glasses. Which is something many women can relate to. (Well, maybe not the superpowers part.)

Geek-Girl is the heroine, secretly we all are/want to be. She’s not yet fully confident in her abilities or herself, but she really does want to make things right, which makes her adorably relateable. It’s nice to see a modern superhero who doesn’t have it all figured out yet.

In Geek-Girl #2 we are introduced to Alt girl; Nina Dante. Nina is likes to push her individuality and stand out – she’s got tattoos, piercings and a new cybernetic eye. Now that’s taking bodimodification to a whole new level. She also seems to be a little “unhinged”, which means things are definitely gonna get interesting.

I, for one, can not wait to see what’s up next for Geek-Girl. Go check it out for yourselves and let us know what you think.

Geek-Girl #2 is Out Now in regular, digital and variant editions, and available at www.geekgirlcomics.com and  www.comixology.com