We’re back, and only slightly worse for wear, from four glorious and fun-filled days at  New York Comic Con! Naturally it only makes sense that we do a full on wrap up.

You can listen to the most recent episode of our show, (Episode 96: NYCC 2016 Wrap Up!) HERE, in archives. OR now we are on iTunes, so you can now download us directly on to your listening device of choice!

Below you can find links to some BONUS links because we love you all that much!:

END_OF_DOCUMENT_TOKEN_TO_BE_REPLACED

It’s almost CON TIME! With New York Comic Con right around the corner, we are talking all things con prep! What to do, what to bring, we talking it all.

You can listen to the most recent episode of our show, (Episode 95: NYCC 2016 Prep!) HERE, in archives. OR now we are on iTunes, so you can now download us directly on to your listening device of choice!

Below you can find links to some BONUS links because we love you all that much!:

END_OF_DOCUMENT_TOKEN_TO_BE_REPLACED

My question from the moment I saw this panel listed on the NYCC app was ‘what IS Star Trek Equinox?’

END_OF_DOCUMENT_TOKEN_TO_BE_REPLACED

Full disclosure: I have had a MASSIVE Crush on Cary Elwes since I was in the 3rd grade and saw Robin Hood Men in Tights. Seeing The Princess Bride only solidified my love. [Yes, I saw Men in Tights before Princess Bride, I grew up in a Mel Brooks loving household. Deal with it].

As soon as they announced Cary Elwes would be at NYCC I knew I HAD to see him. In fact as we have mentioned in many of our con prep episodes of the show it is important to have your “Non-Negotiable” list, this definitely made mine.

The panel took place late in the day on Sunday, in fact it was the last panel slated for one of the smaller rooms, which meant we ended up attending the panel before it just to make sure we got in. The reason for his appearance, was to promote his new memoir, As You Wish: Inconceivable Tales from the Making of The Princess Bride
which you can purchases here, and you should, it is a highly entertaining read.

The panel began with a clip from the movie, more clips would punctuate the panel, and I have to say there is nothing more amazing than sharing in the experience of watching a movie you love with one of the people who made its very existence possible. 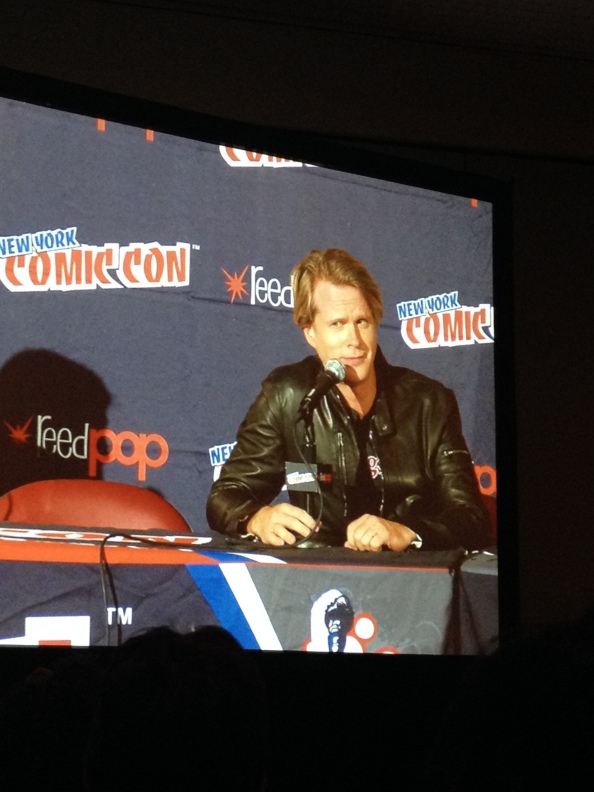 Not only is Cary is a natural-born entertainer, regaling the room with tales of filming, while doing impressions of everyone from the British PA, to Andre the Giant & Rob Reiner, but also just a genuinely nice guy. Someone in the front row coughed and he without even really pausing filled a cup from the pitcher of water on the dais in front of him and handed it to her.

Once the moderator had finished, there was apparently no time left for questions, however Cary Elwes is not a man to disappoint, and so despite the fact that the volunteers and moderator alike were clearly attempting to wrap it up, proceeded to take a few questions anyway.

The perfect way to end a con.

A word to the wise if you ever attend a Stephen Amell panel at a con MAKE SURE YOU ARE CAUGHT UP! Spoilers abound. That being said, he’s complete candor is part of what makes him so endearing.

Stephen answered a ton of fan questions on everything ranging from sharing stories of pranks on set to hinting about big things coming Laurel’s way this season. I think we can all pretty much infer what that implies. Sorry non-Laurel fans, looks like she is not only here to stay, but her role is about to get even bigger.

In a surprise move, Colin Donnell aka Tommy Merlyn himself crashed the panel much to the delight of fans in the room. It actually turned out to be pretty good timing, as not only would the episode he was due to appear in air the following week (10/15/14), but also his new show The Affair, staring Joshua Jackson was to premiere the following night. Colin joked that it is in his contracts now that he will only do shows with ridiculously attractive men.

One of the most fun things about Stephen’s panel was the fact that you could truly tell that he is a fanboy himself. The man refers to episodes by episode numbers and can rattle off specific details of scenes. He even mentioned going back to watch a specific scene from the first season to double-check on a detail mentioned in the opener for season three. He talked about his desire, time permitting of course, to go compete on America Ninja Warrior, and host an episode of Monday Night Raw.

You can tell not only does he love what he does but also is genuinely grateful for all the support from fans. But of course anyone who follows the man on social media knows that.

You can listen to the most recent episode of our show, (Episode 57: NYCC 2014 Wrap Up! ) HERE, in archives. OR now we are on iTunes, so you can now download us directly on to your listening device of choice!

This week’s show was a little different, since NYCC was this past weekend, we took this episode to do a little recap and share some fun stories.

END_OF_DOCUMENT_TOKEN_TO_BE_REPLACED

The time has come, to reveal the list for the First Annual Official It’s all Geek to Me Radio NYCC Scavenger Hunt!*

The rules are simple, below is a list of items you need to find at NYCC 2013. To make things easier all items on the list are digital, meaning that all you need to submit is a photo of it to us. Easy peasy right? Each item on the list has been categorized into a point level, different items are worth different amounts of points, based on the level of difficulty we, your lovely hosts Cate & Em, have perceived them to be. Collect as many items as you can and submit the pictures of them, as well as your name, and twitter handle to us at Itsallgeektomeradio@gmail.com by 11:59pm EST on Sunday, 10/13, for your chance to win. Once we have all the contest entries we will tally the scores and announce the 1st, 2nd and 3rd place winners on the air on 10/20. Yup that’s right, there will be THREE winners.

What’s a contest without prizes right? Here over at It’s All Geek to Me Radio we believe that hard work should be rewarded. Here’s where you gotta trust us a little bit. We have tons of fun things in our geeky giveaway arsenal, including a Blu-ray/DVD combo pack of Marvel’s The Avengers, assorted geeky t-shirts, comics and promo material. Not to mention, the insanely awesome crafty abilities of Cate and the fact that we shall be at NYCC and therefore picking up some stuff to add to the bounty.  Follow us on twitter at @allgeek2meradio where we will periodically post pictures of the prizes from now til the end of the contest. Trust us it’s gonna be good.

-Picture of someone dressed as a femme!doctor

-Picture of child in cosplay

-Picture of someone dressed as a Zombie

-Picture of someone doing the Nerdfighter symbol

-A Doctor Who button

-Picture of a quidich match

-Picture of a geeky tatoo

-Picture of a Link & Zelda (together)

-Picture of a Brony

-Single issues of  The Dreamer Comic

-Picture of someone dressed as Rick Grimes

-Picture of someone dressed as the 9th Doctor

-Picture of someone dressed a Sam & Dean Winchester (together)

-Picture of an animal dressed up for NYCC

-Picture of any steam punk version of a Marvel Character

-Picture of any steam punk version of a DC Character

-A cosplayer on the streets of NYC

-Picture with someone dressed as an Ood

-Picture of a “celebrity” in cosplay

-Picture of some one dressed as Richard Castle

-Picture with Cat & EM (55 points if they are in Cosplay)

-Picture of a robotic R2D2

-Picture of someone buying an actual comic at comic con

-Picture of a child dressed as Ewok

-Picture of someone dressed as a Silent Hill Nurse

*Please Note, we are not affiliated with NYCC, we just happen to doing an event that coincides with theirs. Please feel free to email us with any questions/concerns at itsallgeektomeradio@gmail.com

Congrats to our Winner: Leslie!